I’m always on the lookout for a rich and fudge-y chocolate brownie, and these Neapolitan Cheesecake Brownies are exactly that! Dark chocolate brownies (made from a box mix) are topped with a cheesecake filling, melted marshmallows and a luscious chocolate frosting.

PLEASE NOTE: WE DO USE REFERRAL AND AFFILIATE LINKS FOR ITEMS CHEF ALLI LOVES AND RECOMMENDS

Is there anything better than chocolate?? It seems my family never tires of it and to be honest, neither do I. Brownies are always at the top of the list, of course, but we also enjoy this chilled Dreamy Chocolate Dessert Trifle (especially during the summer!) and we like using our Instant Pot to make warm and oozing Chocolate Lava Cakes, too.

And if you’d like to enjoy some chocolate for breakfast, how about a nice batch of Super-Moist Chocolate Chocolate-Chip Muffins to start your day?

When we get a hankerin’ for white chocolate, I like to make White Chocolate Strawberry Poke Cake, since it’s a family favorite around here, along with Salted White Chocolate Crunch for those gatherings where a snack mix works well.

And what other chocolate goodies are we partial to? This yummy Pumpkin Pound Cake with Chocolate Chips and Cider Glaze ranks quite highly and who could forget a No-Bake Chocolate Butterfinger Pie?

Why This Recipe is a Keeper

These brownies turn out looking pretty fancy (like you slaved all day in the kitchen to prepare them), but in reality they are one of the easiest brownies to make.

I love it that the base is a simple brownie box mix that is embellished a bit by some substitutions that elevate the flavors of the brownies, such as butter in place of oil, strong coffee in place of water, and by adding a good splash of vanilla extract to the batter, too.

Due to the layering effect of these brownies they turn out looking pretty special and my guests have been delighted every time I’ve served them. They are yummy when paired with a steaming hot cup of coffee or mocha, and I especially enjoyed the dark chocolate paired with Ad Astra Dessert Wine from Wheat State Wine Co. of Winfield, Ks. Incredible!

It’s also fun to customize these brownies by changing up the color of the drizzled chocolate over the top. I liked the pink drizzle since the brownies were paired and garnished with berries. (And wouldn’t the pink be perfect for serving at a bridal or a baby shower?)

The cheesecake layer of these Neapolitan Cheesecake Brownies can also be customized depending on the theme of your gathering or even left as the original cheesecake color if you don’t feel like messing with food coloring. And, you can certainly add flavorings to the cheesecake layer to switch things up a bit, too. Do what your creative heart desired!

How to Make Neapolitan Cheesecake Brownies

What Tools Are Helpful for Making Chocolate Cheesecake Brownies?

Does it matter which brand of brownie mix I use and does it have to be dark chocolate?

Can I add flavorings to the cheesecake layer if I’d like?

What is the best way to soften cream cheese?

What is the best way to melt chocolate without scorching it?

If I only happen to have large marshmallows on hand (instead of the mini marshmallows), what can I do?

Looking for some Main Dishes when Serving These Neapolitan Cheesecake Brownies for Dessert? Here you go!

BEEF AND CHEESE SANCHILADAS – a tasty Mexican favorite that’s a cross between a sancho and a beef enchilada smothered with more enchilada sauce and topped with cheese.

INSTANT POT SAUSAGE, BACON AND POTATO SOUP – Here you go, folks – a super easy, super creamy, super tasty potato soup that can be made in one pot! 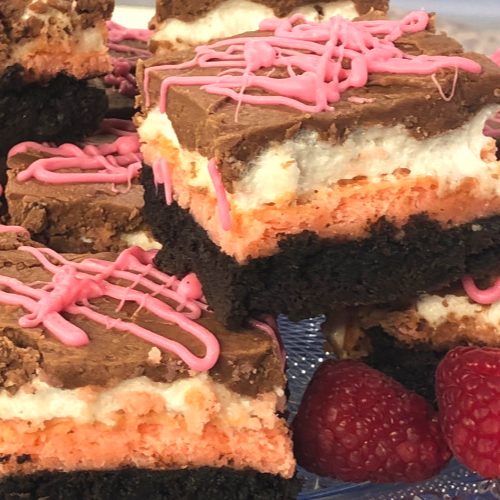 This is a sponsored post paid for by From the Land of Kansas, the state trademark program that promotes and celebrates agricultural experiences and products that are grown, raised or produced in Kansas. Visit their website for more information! Our featured guest and member business for this televised segment on Good Morning KAKEland is Chris Tyler, of Wheat State Wine Co, Winfield, Ks.   All opinions expressed within this post are my own.