No matter what you call them – cinnamon buns, cinnamon monkey bread, cinnamon roll bread…..they all boil down to one sweet thing: warm, tender, ooey-gooey, cinnamon-y heaven. Am I right?

Howdy! Chef Alli Here. Let’s Get You Cookin’….Shall We? ?

Because my boys always get a GI-NORMOUS homemade cinnamon roll made for them on the morning of their birthday (complete with birthday candles, singing, and usually served in bed), I can’t believe I’ve never figured out super-simple, easy way to make Homemade Jumbo Cinnamon Rolls….what is wrong with me??

Anyway, the morning my son Wyatt turned 23, I was in the kitchen (at 3:30 a.m., mind you!) making his cinnamon roll when I had an epiphany.

Everything became crystal clear in my mind and I realized EXACTLY how I needed to make jumbo cinnamon rolls….THE EASY WAY.

Omgosh. How could I have overlooked this easy method for so long?? I can’t wait to show it to you.

What to Love About This Recipe for Homemade Cinnamon Rolls –

What Makes THIS Cinnamon Roll Recipe Different from All The Rest?

Traditionally, cinnamon rolls are made by rolling out the dough, spreading it with butter, cinnamon, and sugar.

Next the dough is rolled into a long log, slicing across the log of dough to make cinnamon rolls.

This recipe begins with the same first step (rolling out the dough and spreading it with butter, cinnamon, and sugar), but instead of rolling the dough into a log, it is sliced into strips.

The strips of dough are then individually rolled into cinnamon rolls making this part such an EASY task.

Using this method also ensures that your cinnamon rolls are all unison in size which helps them to bake evenly.

Can This Cut-and-Roll Method Be Used to Make Any Size of Cinnamon Roll?

Great question and the answer is YES!

To make 12 medium-sized cinnamon rolls, cut the dough into 6 long horizontal strips, then cut each of those strips in half vertically.

This will give you 12 shorter strips of cinnamon roll dough to roll up and place into your rimmed baking sheet.

If you want to make 16 small cinnamon rolls, cut the dough into 8 long horizontal strips, then cut each of those strips in half vertically, giving you 16 shorter strips to roll into cinnamon rolls.

What Basic Ingredients Do You Need to Make the Best Cinnamon Rolls Ever??

To help you bread dough (or your cinnamon rolls) raise a little more quickly, provide a warm environment for them.

Turn your oven on for 1-2 minutes, then turn it completely off. Place the bowl of dough or pan of cinnamon rolls into the warmed oven to let them raise. This warm environment really helps speed up the process of raising the dough.

When you place your ball of dough onto the floured work surface to begin rolling it out, give it the “resistance” test. If the dough rolls out, but then immediately sucks back, this means it needs to rest a bit more.

Walk away from the dough for about 10 minutes to give it some time, space, and a rest. Chances are, when you give the dough another shot with the rolling pin, it will roll out much more easily.

Tools That Are Helpful for Making Easy From-Scratch Cinnamon Rolls 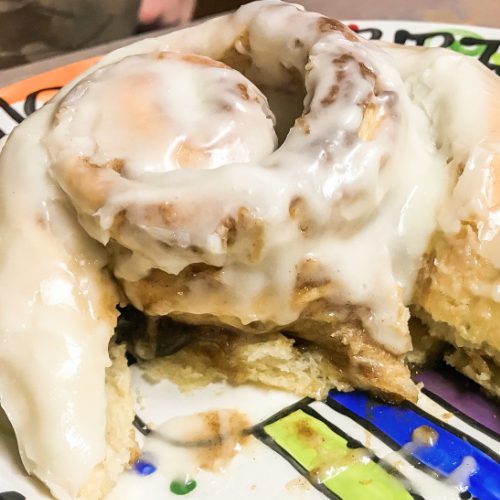 Thanks for visiting! I hope you return soon for more yummy recipes for your family.

Please Note: We do use referral and affiliate links here for products and services that are recommended.