Who loves baked pumpkin cake doughnuts that you can customize? I DO, that’s who! My family goes ga-ga over these Baked Pumpkin-Spice Cake Doughnuts with Cinnamon Glaze when I make them for breakfast or a lazy Sunday morning. 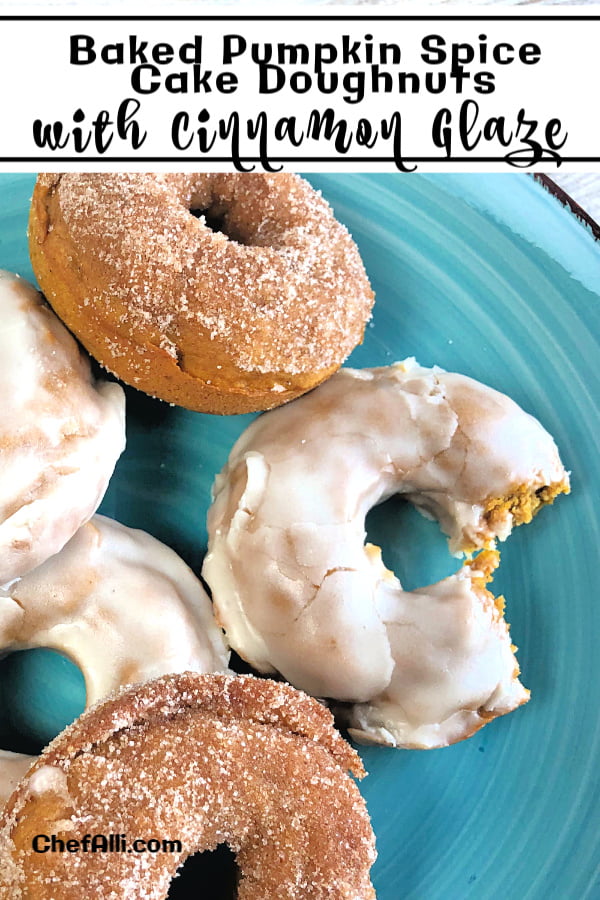 Note: We do use referral and affiliate links here for products and services that Chef Alli loves and recommends.

Howdy! Chef Alli Here. Let’s Get You Cookin’….Shall We??

Nothing says AUTUMN like pumpkin spice, right? And nothing says YUM more-so than fat, yummy cake doughnuts, baked up and brimming with all the flavors of pumpkin and warm spices.

You’ll never believe how absolutely easy these little suckers are to mix up and bake, then to finish by simply dipping them into either the maple-cinnamon glaze or a cinnamon-sugar topping….or both.  I can’t tell you HOW MUCH my family loves these, nor how fast they fly out the door!

What ingredients do you need to make Pumpkin-Spice Cake Doughnuts with Maple Glaze or Cinnamon-Sugar Topping?

Canned pumpkin is  the flesh of pumpkin that’s been pureed. Sometimes you’ll see it canned as 100% pumpkin and sometimes you’ll find it as pumpkin puree – these are the same thing, so don’t be thrown for a loop.

Also, keep in mind that pumpkin pie filling is NOT the same thing as canned pumpkin, so you’ll want to inspect the can thoroughly when you pick it up at the grocer.

You’ll typically find canned pumpkin with the other pie fillings in the baking section, but not always.  Some stores like to play the game of “where’s the canned pumpkin kept??” – so crazy.

These components comprise the dry ingredient mixture that gives your doughnuts structure and allows them to rise.  The dark brown sugar helps give your doughnuts more of a deep caramel flavor that compliments the pumpkin spice very nicely.

If you over  mix the doughnut batter, this causes the gluten to be released and this can make your doughnuts tough in texture, instead tender and dreamy.

Typically, because cake doughnuts aren’t deep fried, they aren’t as sweet as a glazed, fried doughnut.  Keep in mind that when you top the doughnuts with the cinnamon glaze or the cinnamon-sugar topping, this will add lots of sweetness to the doughnuts – delicious!

Are cake doughnuts healthier than other doughnuts since they are baked?

Ummmm….not really. Cake doughnuts may be a better choice than a fried doughnut, but doughnuts eaten frequently shouldn’t be considered a regular part of a healthy eating plan.

However, it’s pretty safe to say that a cake doughnut is typically (though not always depending on the ingredients) lower in fat and calories than a doughnut that’s been deep-fried and glazed, or doughnuts that contain fruit filling or creme filling.

Doughnuts can’t really be considered nutritious….no matter which one is tempting you. Such a bummer. 🙁

Actually, you can make your doughnuts in a different form: a doughnut-shaped MUFFIN! Since the muffins will be a bit thicker, you will likely need to bake them 1-2 minutes longer.  To know when they are fully baked, use your finger to lightly touch the muffins on top; when the doughnut immediately springs back, they are done.

Actually, yes! You can place the doughnut batter into a freezer bag and snip off one corner.  Pipe the batter through the hole in the corner of the bag and into the doughnut pans, filling them to the top, or close to it.  You may need to use a butter knife to make the batter even on the top of each one.

Yes! Remember that you have to let the doughnuts rest a bit before they will want to lift out of the doughnut pan easily.  Once the warm doughnuts are out of the pan, immediately glaze them or dip them in the melted butter, then dipping them into the cinnamon-sugar mixture.

Love a cake doughnut for what it IS and what it ISN’T – it’s different and has it’s very own, specific style, much unlike your regular run-of-the-mill fried and glazed doughnut.  Baked cake doughnuts are easier and much less messy to make since they aren’t deep-fried in hot fat, a definite plus.  Also, cake doughnuts are actually more delicious and enjoyable once they are fully cooled! 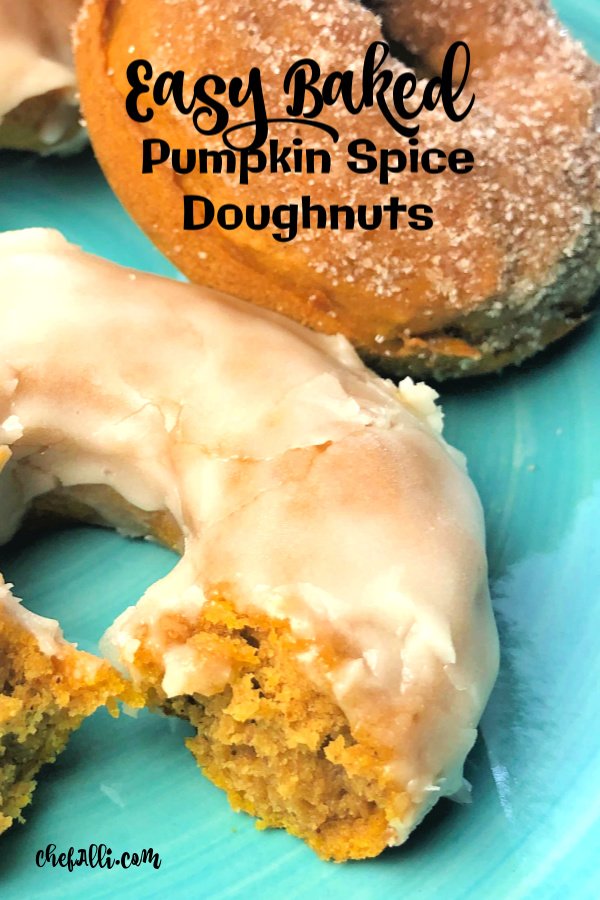 Other Baked Treats You May Enjoy –

To Make the Cinnamon Glaze

To Make the Cinnamon-Sugar Topping

To Finish the Baked Doughnuts

Doughnuts may stored in an air-tight container for up to 3 days.  To freshen the doughnuts as you eat them later, pop them into the microwave for 8-10 seconds.   www.ChefAlli.com
Course: Breakfast/Brunch
Cuisine: American
Keyword: breakfast, cake doughnuts, Cinnamon, pumpkin spice

We love hearing from our readers and followers, so leave us a comment if you’d like.  And, if you don’t hear back from us shortly, know that we may not have seen your comment.  Feel free to reach out to us by email:  [email protected]