Wondering how you can make an inexpensive boneless ham taste absolutely and amazingly delicious? This easy recipe for Cheap Oven Baked Honey Ham is your ticket!

This is the perfect ham that’s simple to make and turns out just the way you want it to, every single time. And, because there’s no center bone, you can slice it up very easily to serve at once.

This recipe calls for a buffet ham….what in the heck is that?!

Buffet hams are the boneless precooked hams that you see at the grocer that are always perfectly oval-shaped and are the least expensive hams.

This is because a buffet ham is actually made from pieces of ham that are pressed together via a process that uses water and salt.

Buffet ham is easy to work with because it’s perfectly shaped and has no center bone. Buffet hams typically always weigh in at exactly 4 pounds so they cook quickly.

Since a buffet ham is boneless, it’s very easy to slice for your dinner, especially if you want a ham that you can slice right at the holiday table with everyone looking on.

I think a buffet ham is the best ham for new cooks to bake as their first-ever ham. Once you are successful making a buffet ham, you will feel much more confident baking other types of hams, such as a spiral-cut ham or any other bone-in ham.

What to love about this inexpensive boneless ham recipe

What you’ll learn from this recipe –

**Full, printable recipe card below – just scroll on down within this post to find it!

Answers to Common Questions Asked About This Easy Ham Recipe

Which tools are helpful for making baked ham in the oven?

A roasting pan or deep casserole dish is good for baking ham.

For scoring the ham, use a sharp carving knife or chef’s knife.

Applying the glaze is super easy when you apply it using a silicone basting brush.

What is a buffet ham?

The label won’t likely call it a “buffet” ham, but they are the boneless precooked hams that you see at the grocer that are always perfectly oval-shaped and they weigh in at a perfect 4 lbs.

Buffet hams are usually always the least expensive hams since they are a pressed ham, not what’s called a whole muscle ham.

If ham is pre-cooked when I purchase it, why am I cooking it again?

Nearly all hams purchased at your local grocery store are pre-cooked….check the label to be sure. Technically, since these hams are fully cooked, they don’t have to be baked to be safe before eating.

However, because nobody really wants to eat ice cold ham as part of a holiday meal, we bake (reheat) it, thus providing the perfect time to add more flavor by caramelizing the ham on the exterior and also by adding a sauce.

Do you cover a ham when you bake it in the oven?

I cover my baked hams initially so that they can stay moist during the cooking time.
Once the ham is nearly full cooked and hot throughout, I uncover it, brush on the glaze, then let the ham continue to cook so it can caramelize on the exterior.

How do you keep ham from drying out as it bakes in the oven?

Covering the ham for the majority of the baking time helps keep it from drying out, as does making sure the ham isn’t over cooked. Overcooking causes any meat to become dry and tasteless!

How should I slice my ham when I’m ready to serve it?

Place the warm ham onto a large cutting board. Using your sharpest carving knife, starting at one end, slice across the ham into 1/2-inch thick slices. I usually “hold” the ham with a meat fork inserted into the ham about one-third of the way from the opposite end so it doesn’t move around when I’m slicing it.

You’ll also want to add a bit of the ham sauce or ham liquids (from when it cooks) to the slices in the pan so they have some juice there for additional moisture.

**If you’re slicing your ham to serve it later, instead of placing the ham onto a platter at this time, go ahead and put it into a casserole dish so that you can pop into the oven to reheat it.

How can I make my ham look pretty on the platter for serving?

I like to stack my ham slices a bit by overlapping them on on top of the other on my platter, then drizzling all of them with a bit of sauce. Overlapping the ham slices makes it easy for people to pick up a slice or two when serving themselves, especially if you have tongs for them to use. I also like to slice oranges, placing them randomly around the outer edge of my platter for pretty color.

Can I slice my ham ahead of time and re-heat it for the meal later when I’m ready to serve it?

Absolutely. I do this all the time and it feels so good to have it done and ready ahead of time! Slice your ham as directed above, placing it into a casserole dish along with some of the prepared sauce or pan juices. Let the ham fully cool, then cover with foil and place into refrigeration.

When you are ready to heat the ham for your dinner, remove it from the fridge 30 minutes ahead of time. Preheat the oven to 300 degrees F.; warm the ham slices, covered, for 15-20 minutes, or until hot throughout.

I really like reheating ham slices in a skillet with a bit of oil over medium-high heat. When the oil is nicely hot, add the ham slices, taking care not to crowd them in the skillet too much. Brown the ham slices on each side, cooking them just until hot throughout. 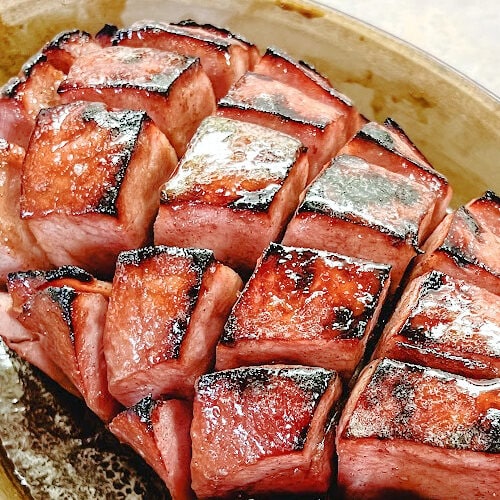 Please Note: We do use referral and affiliate links here for products and services that Chef Alli loves and recommends. If you click on a link and make a purchase, I may receive a small commission at no extra cost to you. For more information, please read my disclaimer here. 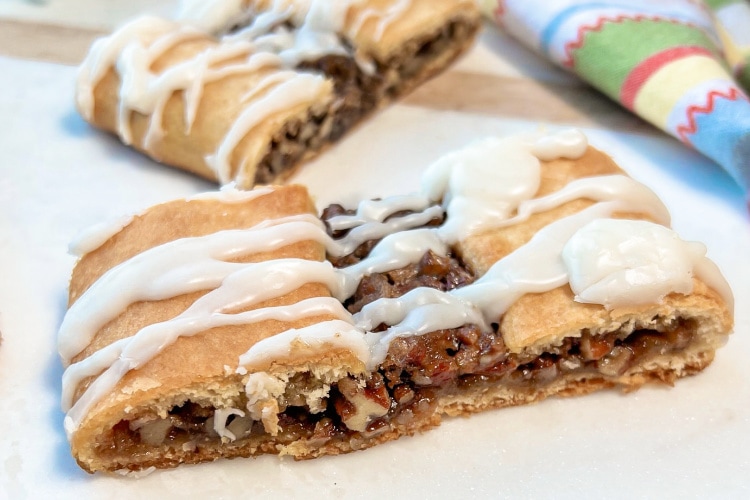